The previous exercises of the week have been upper, lower or core strength training exercises. What I’ve failed to do, is provide some stretching exercises. Stretching is the one aspect of training that is ignored by most people. But it is just as important as any other aspect of training. You can not expect to stay injury free over the long term if some form of stretching is not done.
The kneeling hip flexor stretch addresses what are most likely the tightest group of muscles in the body, the hip flexors. A large part of the population works at a desk or commutes to and from work each day. What happens when you’re seated at a desk or cramped up in a car on the Expressway for 2 hours each day? You’re hip flexors are in a shortened position for an extended period of time and become increasingly tight. If your hip flexors become increasingly tight, a whole lot of problems can occur. Your pelvis gets pulled into an excessive anterior tilt and problems will occur up and down the entire body including poor posture and risk of straining your hamstrings. Tight hip flexors will also have an affect on performance. They will cause you to fall forward when squatting or prevent you from getting full extension at the hip when sprinting.
Below is a picture of the kneeling hip flexor stretch. It can be performed many ways, but this is the most basic. 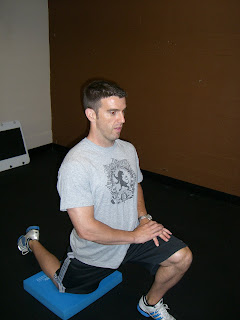 Think about pressing that front knee as far forward as possible, allowing your hips to drop down and forward. Hold for 10-15 seconds in the bottom position, come back and repeat 2-3 times.
This is also one of the few static stretches I’ll have a client perform before a lower body workout. By stretching out the hip flexors, you are almost turning these muscles off. If these muscles are turned off, you’ll find you’ll be able to get deeper and prevent yourself from falling forward when performing a squat.
Remember, stretching isn’t just something done by those cute girls in yoga class. It’s essential to keeping you injury free and performing up to your abilities.