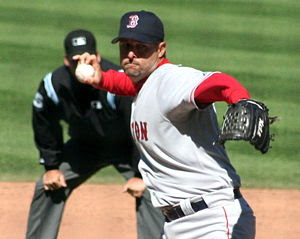 What was supposed to be a great weekend for a Boston sports fan, turned into one of the worst sports weekends eva (as they say here in Boston). First, the Sox lose a gut wrenching game in the bottom of the 11th Saturday night. That was supposed to be the night Josh Beckett would prove his post-season dominance. It turned out that the only thing he proved is that he is now mortal. Not only do the Sox lose the game, but the game takes a painfully slow five and a half hours to play. By the end of the game I had run out of beer and it was too late to get anyone to deliver a pizza.

So on to Sunday. I really thought the Patriots had a chance to beat the Chargers. I couldn’t have been more wrong. The Patriots put up another stinker. Their offense was terrible and their defense was even worse. The offense has an excuse. No #12 at quarterback. But what excuse does this defense have? They got run over, by and through. I thought the Miami game a couple of weeks back was a fluke, but actually it may have been a sign of things to come.

So on to Monday. The Red Sox lost Saturday night, the Pats got smoked Sunday night, there’s no way the Red Sox can lose on the last day of this long weekend we were given by the great Christopher Columbus. Well, may be they could lose, but they sure wouldn’t get blown out. They had John Lester going. He’d been pretty much unhittable for a month…until yesterday. Final score, 8-1 Devil Rays. They’re still the Devil Rays in my book. What made this even worse was that I actually paid to go to this game. I shelled out $150 for basically an obstructed view seat (even though it’s not listed as an obstructed view) in a stadium in my opinion that needs to be blown up. Then watched the Sox get blown up.

So come on Wake. I need you tonight. I need that knuckleball to dance. I need you to lift my spirits. Not just mine, but the spirits of every Boston sports fan.